Since its foundation, the War Museum has left a strong imprint on the Greek society, promoting the war history of Greece, from antiquity to the recent past.

The museum is the living projection of freedom and security, offered by the Armed Forces of our country, to the Greek society through time. At the same time, a tribute is paid to our warrior ancestors thus expressing respect to their sacrifices, which allow us to enjoy a free and prosperous homeland in its present form and chart our course in the future based on the lessons of the past.

It is a dynamic space of active learning, where the visitors have the opportunity to wander through the history of our people’s struggles, which come to life before our eyes through the relics of various historical periods. At the same time, it aims to inspire a peaceful-leaning conscience in visitors and especially in young people, who are carrying the responsibility to build a better world.

Our goal is to upgrade our institution further through a grid of interactive activities, playing a leading role in the modern era.

President of the Board of Military Museum 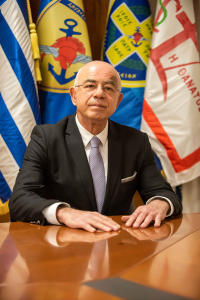 He is a graduate of the Athens University of Economics and Business (ASOEE) and has worked as an economist and business development consultant.

He has developed an intense political activity as follows:

1986 – 1989: Candidate for Mayor of Liossia Prefecture (Ilion), Leader of the Official Opposition

2004 – 2009: Member of the Standing Committees of the Parliament of Economic Affairs, Production and Trade, Educational Affairs and the Inter-Party Committee on Friendship with Parliaments of other countries

He is intensely active in the fields of art, culture, history. For more than 35 years, he has been systematically engaged in the study and collection of relics of Modern Greek History. His collection of over 6,000 heirlooms includes original archival and photographic material, newspapers, lithographs, uniforms, helmets, medals, swords, various objects and weapons of the Greek Army and its occasional allies and rival armies.

In 1995, he created the National Historical Museum of Anastasios Liaskos in Kontodespoti, Evia, which was inaugurated by the late President of the Republic, Konstantinos Stefanopoulos.

In 2018, he established the Historical War Museum of Anastasios Liaskos in Zakynthos, the only one in Greece with three-dimensional representations (dioramas) of the three most important wars of the 20th century, which was inaugurated by the former President of N.D., Mr. Evangelos Meimarakis.

He has organized and participated with his collection in various historical exhibitions in Greece.

He was a member of the committees for the historical reports of the Greek Parliament.

He is a sportshooter, founding member and honorary President of the Shooting Clubs of Evia, Serres and Kavala.

He is married to Christina Tetradi, a businesswoman and vice-president of the Hotel Chamber of Greece, and is the father of 3 children. 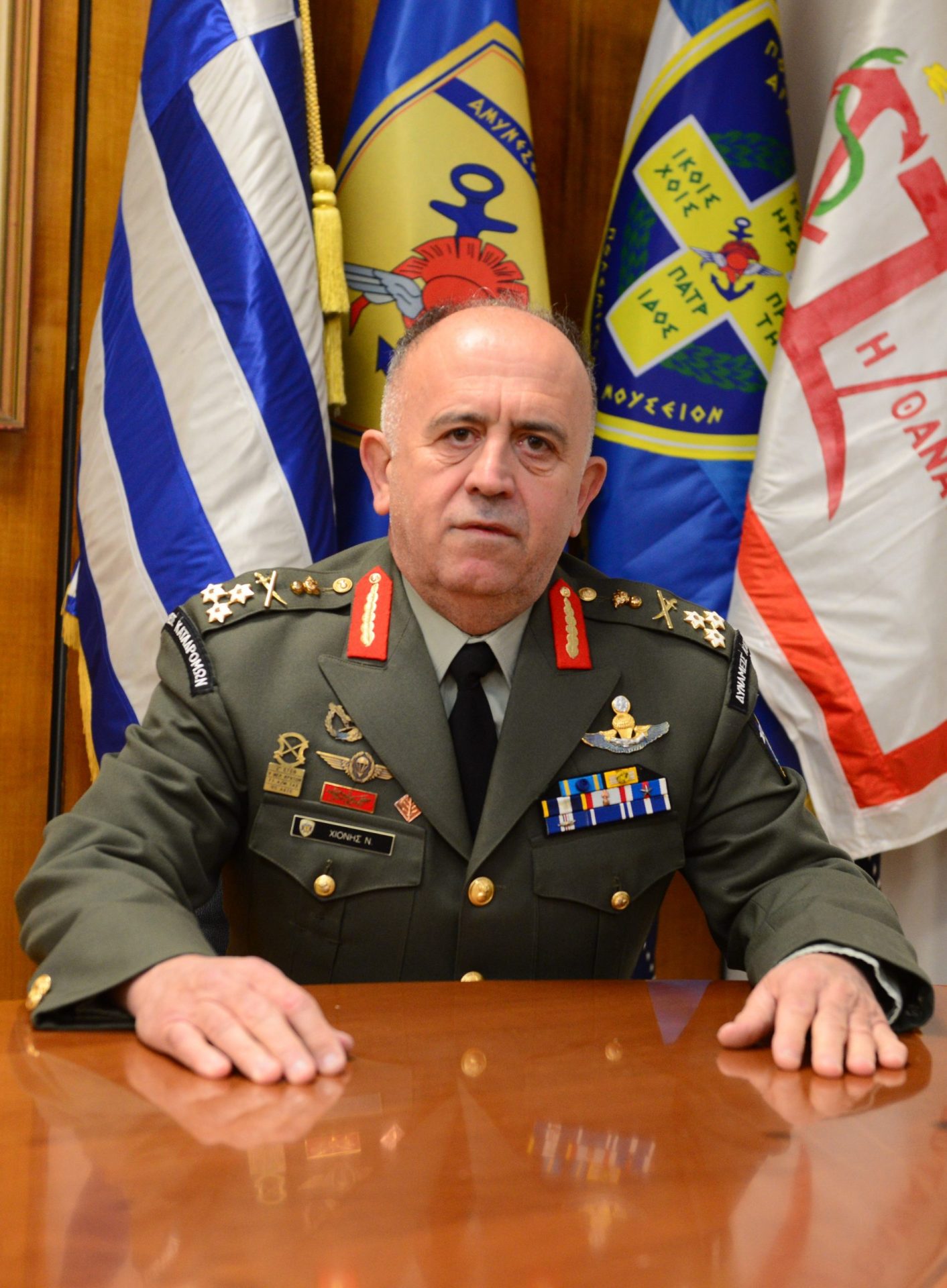 Nikolaos Chionis was born in 1963 in Athens.

A graduate of the Hellenic Army Academy, he attended all the planned trainings of his Arm. He completed his training as a Paratrooper and after graduating from the Raiders school, he was assigned to Special Forces units. He trained in the Special Forces in Greece, Germany and the USA. As a member of NATO (AFSOUTH), Naples, Italy, he participated in training schools.

He graduated from the Hellenic Supreme Joint War College, the Hellenic National Defence College and the University of Plymouth, where he earned an MSc in “Applied Strategy and International Security”. He holds the titles and diplomas: “Crisis Management”, University of Aberdeen, “Strategic Studies”, Centre d’ Études Diplomatiques et Stratégiques CEDS and “Counterterrorism and International Security”, UNESCO Club Force of Peace.

In his career, among others, he served in Special Forces Units of the Army in duties corresponding to his rank. As a staff member, he served in the 1st Infantry Division, NATO/AFSOUTH, the Hellenic Army General Staff and the Hellenic National Defence General Staff. He was appointed Commander of the Formation in the 5th Division of “Cretans” (Chania), in the 71st Airborne Brigade “Pontos” (Kilkis) and in the 95th Higher National Guard Battalions Command (Rhodes). He served as Chief of Staff in the Army General Inspectorate, and as Director in the Special Forces Directorate of the Hellenic Army General Staff, before he retired in 2019.

He returned to active duty with the rank of Lieutenant-General on March 18, 2021.

Nikolaos Chionis was awarded a prestigious mention (HAGS), distinguished at the School of Amphibious Operations (San Diego), USA, and he has been awarded all decorations, medals and commendations provided for his rank.

He is fluent in English.

He is a founding member of the Association of Friends of the Military Museum of the Rethymnon Chromonastery. 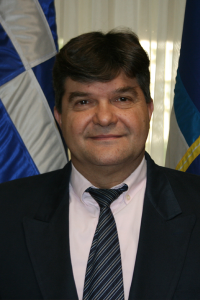 Ioannis Theodosoulakis was born in 1961.

He is a graduate of the Hellenic Air Force Academy, Department of Engineering (ESA). He attended all the schools provided for his rank and specialty, including the Conversional Forces in Europe (NIS) and the Security Assistance Management (USA).

In his career, among others, he has served as a Chief of Logistics at Kabul Airport in Afghanistan, as Assistant Air Fellow at the Greek Embassy in Washington, DC, USA, and as Commander at the State Aircraft Factory (SAF) in Elliniko. At the same time, he has repeatedly served as instructor at HAF schools.

He is fluent in English.

During his career, he was honored with three commendations, four honorable mentions, as well as with all that is provided for his rank (decorations, medals and commendations). In addition, he was awarded medals for outstanding deeds by NATO and the Minister of National Defense for his participation in the Air Force mission in Afghanistan with ISAF forces.

He returned to active service with the rank of Major General (AF).

In his free time, he designs and constructs dioramas, and also repairs-restores historical vehicles, museum exhibits and antiques. 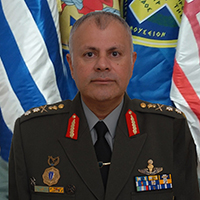 He is from Iera Poli of Messolonghi and was born in 1961 in Athens. He graduated in 1983 from the Hellenic Army Academy and was sworn in as an Infantry 2nd Lieutenant. As a junior officer, he served in the Special Forces and completed his training in schools at home and abroad. He is a graduate of the Military School of Foreign Languages, the School of Programmers – Computers of HNDGS, the Supreme War College, the School of Strategic Information and the Joint School of Defense Staff Officers. As a Senior Officer, he served in corresponding staff and administrative positions of his respective rank. He served as Staff Officer at NATO Headquarters (AFSOUTH) in Italy, Staff Officer at SFOR Headquarters in Sarajevo, Commander of the Hellenic Contingent in Bosnia-Herzegovina, and Defense Attaché at the Greek Embassy in Riyadh, Saudi Arabia, with simultaneous accredation in the countries of the Arabian Peninsula. He is a graduate of the US Infantry Division Command Unit. He trained at the International School of Long Range Patrols in Germany, at the NATO School in Oberammergau, Germany, and at the Schools of Information & Communication Systems at NC3A in the Netherlands and at NCISS in Italy. He holds a Master’s degree from the Royal College of War, United Kingdom, and a Diploma in Strategic Management and Leadership from the London Educational Institution. As Commander of 562 TP and Director of the 2nd EG/ 16 SP in Serres, in the two years 1995-1997, he was responsible for the organization and the operation of the Lachana Museum. During his service, the individual and group armament of the two opponents and the audiovisual material in the showcases were maintained. From the position of Vice President of RAOA in the three years 2017-2020, he developed, promoted and supported the cultural activities of the Union and its Branches, with the aim of projecting and protecting military monuments and organizing events to preserve and enhance historical memory. He speaks English, Italian, Serbo-Croatian and is an enthusiastic supporter of lifelong learning. During his 35 years of career, he has been honored with all the decorations, medals and commendationsprovided for his rank. In his free time, he is engaged in gymnastics and music (guitar, performance). He is an enthusiast of horseback riding, shooting with firearms (pistols – revolvers) of various ranges and, in particular, with 9 mm pistols. He trains in the Sports Shooting Club at the Camp of Cavalry Captain Nikolaos Varytis. In 2014, he retired with the rank of Major General, “having successfully completed his career”. From July 31, 2020, he was appointed to the Board of the Athens War Museum and is responsible for the communication and extroversion actions of the museum for the celebration of the 200th anniversary of the 1821 Greek Revolution. He returned to active service with the rank of Major General on March 18, 2021. 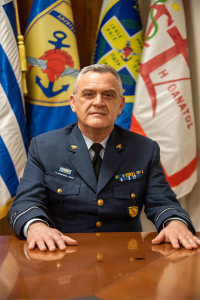 Konstantinos Bibizas-Pinis was born in 1960.

He is a graduate of the Hellenic Air Force Academy (HAFA), class of 1982. In addition, he graduated from the Air Force Junior Staff School (SAF/SJAS) and the Aviation War School/Senior Department (AWS/S).

During his service in the Air Force, among other things, he served as a permanent military trainer at the HAFA, as a staff member and Head of the General Staff, and as Commander of the School of Non-Commissioned Officers (SNCO). After his retirement, he worked in the private sector, as an adult educator at the Vocational Training Center (VTC) “Education – Communication – Design – Implementation of Community Programs” and in particular in the training of private security personnel (Security).

He has been awarded all the decorations, medals and commendations provided for his rank.

On 20-1-2021, he was recalled to active service, as Permanent Member from the Reserve.

He was President and Secretary of the Traditional – Folklore Association of Kamatero “To Giordani” and organized the exhibition of the association.

In addition, he is a founding member of the Alumni Association of the HAFA “IKAROS” and is elected Chairman of the Audit Committee of the Association.

Alexandros Avrionidis was born in 1963. He is a graduate of the Hellenic Military Academy Combat Support Officers class of 1986 , Economist and of the School of Economics of the Aristotle University of Thessaloniki University. In addition, he is a graduate of the School of Computer Programmers of the Armed Forces, has attended training in various subjects at ORACLE and programming / analysis at IST College as well as all the schools provided for his degree. In his career, among others, he has been Director of the Department of Financial Care and Rights of the General Staff, Commander of the Naval Supply Center, General Manager of the Naval Share Fund, Director of the National Fleet Fund and Director of the 5th Division. He has been a lecturer for many years on ECDL training, Cambridge ICT and Career Awards, and career schools of the Naval Army. He is fluent in English. He has been awarded all the decorations, medals and commendations provided for his rank and specialty. 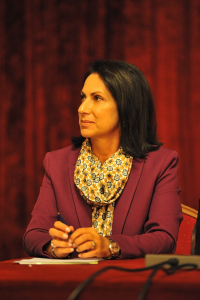 She is a graduate of the Department of History and Archeology of the Faculty of Philosophy of the University of Ioannina, specializing in History (1989). She holds a degree of National Defense Staff in Defense and Strategic Studies, from National Defense College – NDC (2006), a Master’s degree in Leadership Practice from Kingston University, London, in collaboration with the National Defense College (2011), and a Diploma of National Kapodistrian University of Athens (2004) as a Fellow of the State Scholarship Foundation. She attended the Institute of Continuing Education (ICE) of HNDGS (2018), the Advanced Modular Training of the European Security and Defense College (ESDC) of the European Union (2019), as well as a series of training seminars in the field of Public Administration of the National Center for Public Administration and Local Self-Government.

She has authored and edited publications of the Directorate of Army History and the Hellenic National Defense General Staff – indicative: “The Macedonian Struggle and the events in Thrace, 1904-1908 (1998)”, “Historical Names of Active Regiments and Brigades (2004)”, “130 years Directorate of Army History (2017)”,”Course of Jointness through time – examples from military history (2008, 2020)”.

Her research interests focus on the history of the war periods of the Greek Army.