HOW TO GET HERE

2. The Museum does not have parking facilities on-site. Private parking spaces, serving private
vehicles, are located on Rizari Street.

1. Free admission to the War Museum and the Annexes, on the following dates:
• On the first Sunday of every month, from November 1 to 31
Of March.
• October 28 (National Day).
• 21 November (Armed Forces Day).

2. The following are entitled to a reduced price:
• Young people up to 18 years of age from non-EU countries.
• The students of Higher Education
Institutions, Military Schools or equivalent Schools outside the EU.
countries by showing their student ID.
• Citizens of EU member states over 65 years old, upon
presentation of Police ID or Passport or Diploma
Driving.
• Escorting teachers during educational visits of primary schools and institutions from EU member-
states.
• The members of the staff’s families, whether it is about
military, or for civilian personnel (e.e. and e.a.) of the Ministry
National Defense.
• The sessions teachers during the educational visits
schools and institutions of primary, secondary and tertiary education
education, of non-EU countries.
• The personnel of the Security Forces (Hellenic Police,
Fire and Coast Guard).
• Participants in a group of visitors (the term group
means a number of visitors that exceeds the number of 10).

3. The following categories of visitors are entitled to free admission:
The 18-year-olds of the EU member states with the demonstration
their identity card or passport.
• Children up to five years of age from outside the E.U. countries.

• The students of Higher Education
Institutions, Military Schools or equivalent Schools of the member states
of the EU with the demonstration of their renewed student identity, of
student pass or the international student ID card ISIC.
• The accompanying teachers during educational visits
schools and institutions of primary, secondary and tertiary education
education and Military Schools of the EU member states, as well
and independent teachers by showing the free entry card or
valid OLME membership card.
• Holders of the national unemployment card, upon presentation of it
their police ID and valid unemployment certificate
• People with disabilities and a meeting of them, the last one
as long as the disabled persons in question have a disability of 67% or more, regardless
country of origin
• The parents of three-child and large-child families in the country,
until the children reach the age of 25 or regardless
of age if they have a disability.
• Those serving their military service, with the demonstration
Hoplite Identity Card
• The military and civilian personnel of the Armed Forces
Forces (e.e. and e.a.)

• The members of the Board of Directors of the club “Friends of the military
museum”, for as long as their term of office on the Board of Directors lasts.
• Donors and benefactors of the War Museum.
• Holders of a special membership card of the International Council
of Museums (ICOM) and the International Council of Monuments and
of Locations (ICOMOS), with the demonstration thereof.
• Local tour guides with a professional demonstration
their identity
• Free Entry Pass holders along with a session.

4. The Museum may, at its discretion, decide the temporary closure of individual exhibition areas of the Museum, without prior notice, thus in such a case there is no full or partial refund of the ticket value.

1. As the overall safety of visitors, security staff as well as of the exhibits and the building is of
paramount importance, please take notice of the following:
• To leave in the cloakroom (cloakroom), which operates at
entrance to the Museum, any bulky object (luggage
included).
• Do not enter the Museum carrying objects dangerous to visitor safety and public health and safety.
• Do not consume food or drink, except in the premises of the Museum intended for this purpose.
• Do not enter accompanied by pets, excluding them guide dogs accompanying people with
disabilities.
• Please set cell phones to silent mode and avoid their use while touring the exhibition areas.

2. In all exhibition areas of the Museum visitors are not allowed to smoke and/or use
electronic/vapour cigarettes.

3. If minors lose their way inside the Museum, they will be accompanied by Museum staff to the Museum’s ticket area.

1. The War Museum has a separate entrance for the disabled from
side of Rizari Street (amphitheatre-foyer entrance).

2. On the basement level there is a W.C. for the disabled with all the appropriate
infrastructure. A wheelchair is also available.

3. For access to both the basement level and the mezzanine level
and the first floor, there are elevators.

Free access to the Museum’s wireless network is available in all public areas of the building.

1. It is allowed:
• Photographing exhibits with a portable camera, free of charge.
• Photographing and filming people inside
Museum as long as the character of the exhibits is not affected or insulted
and the smooth operation of the Museum is not obstructed.

2. It is not allowed:
• Flash photography.
• Photographing exhibits bearing a relevant sign.

3. Photographing with a camera on a tripod and filming or
video recording is allowed only after the relevant permission of the Directorate
of the Museum.

The availability and rental of the two Multipurpose Halls
(“Rigas Feraios” hall, with a capacity of 100 people and “Adamantios
Korais” hall, with a capacity of 20 people), of Amphitheater I.
Kapodistrias (capacity 500 people), Foyer (capacity 500
people) and the Atrium (capacity 65 people) is available via
telephone communication and coordination with the Public Office
Museum Relations (210 7244464), during working days
and hours. 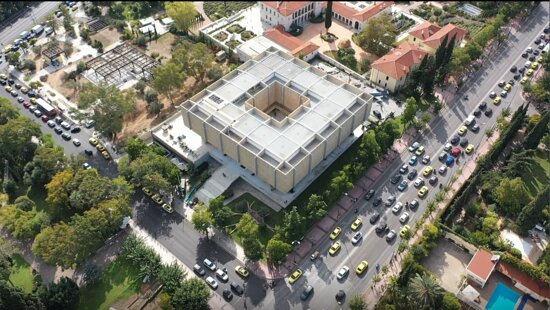 permia
επαληθεύτηκε
Stone Age to Modern We thought the adjacent Tree Of Peace Sculpture an apt countermeasure to all that’s recorded and documented in the museum. With a sweep from stone age to modern it is a fabulously comprehensive account of warfare and battle down the ages. A number of stone weapons are shown and while rudimentary they undoubtedly yielded a heavy blow. Triremes, ancient warships, that were instrumental in guarding and defending the Athenian empire are well worth seeing. The Greek struggle for independence from the Ottomans features voluminously. Horrors endures are powerfully conveyed in paintings such as Hunger in Athens by Nicholas Egon. Sculptural representations from this war include the heroic Markos Botsaris, amongst others. Liberation Celebrations from WW II occupying forces are depicted in evocative black and white photos. A Statue of Jerzy Iwanow-Szajnowicz shows the Greek-Polish athlete who fought in the Greek resistance and was executed by the Germans.

komitage
επαληθεύτηκε
Covers 30.000 years of war history Easy access with public transportation or car (a huge parking nearby) the Athens War Museum covers the whole Greek history of battles bad also there are excibit from stone age. Exceptional part, the guns collection known as Saroglou collection. There's is also an interesting shop where you can find repkicas, coins and other collectibles.